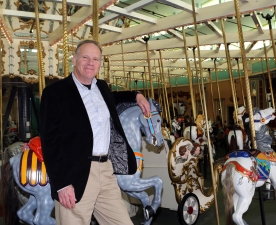 Santa Cruz, CA – After 40 years marketing and promoting the Santa Cruz Beach Boardwalk,
Marq Lipton is stepping down as the Santa Cruz Seaside Company’s Vice President of Marketing
and Sales and transitioning to the role of Executive Adviser.

During his time leading the marketing team, the historic amusement park grew from a popular local
and regional attraction to a nationally and internationally recognized attraction that garnered
attention and awards from media, the travel industry, and amusement park experts worldwide. In
2019 the Boardwalk attracted close to 3 million visitors, making it Northern California’s most
popular amusement park.

“Marq has been instrumental in shaping the identity and character of the Boardwalk and its legacy
during his successful career,” said Santa Cruz Seaside Company President Karl Rice. “I am
thankful that we will still be able to draw upon Marq’s many years of industry and institutional
knowledge to shape our future.”

In his new role as Executive Adviser, Lipton will work with senior management in the review and
analysis of market and industry trends and the creation of strategies to meet new challenges. He will
also lead special projects and initiatives.

Lipton entered the hospitality industry as publicist and photographer for San Jose’s Frontier Village
Amusement Park and then became general manager of Saratoga Springs in Saratoga, California. He
joined the Santa Cruz Seaside Company in 1981 as the Boardwalk’s Promotions Director. He was
promoted to Marketing Director in 1983 and to Vice President of Marketing and Sales in 1990.

“The Boardwalk provides a unique nostalgic experience while always remaining current and
entertaining. It is wonderful to see the Boardwalk get the recognition it deserves,” Lipton said. “It
has been a fantastic experience to work at this historic and family-owned amusement park, with and
for the Canfield family. I have spent 40 years inviting people to have fun, spend time with their
family and friends, and take time to relax.”

In addition to his work at the Boardwalk, Lipton has been active within the Santa Cruz community
and was recognized in 2009 for those efforts as the Aptos Man of the Year. He has served and held
leadership positions on many local and professional boards and organizations, including Santa Cruz
County Conference and Visitors Council, Second Harvest Food Bank, Northern California
Attractions Association, Santa Cruz County Cultural Council, Santa Cruz County Marine Sanctuary
Inter-Agency Task Force, Pajaro Valley Unified School District’s Committee of 12, and Temple
Beth El Jewish Community Center. Currently, Lipton serves on the advisory board of Second
Harvest Food Bank, is a board member of the Aptos Chamber, is VP of public relations of Santa
Cruz Downtown Toastmasters, and serves on the Santa Cruz Sentinel Editorial advisory board.

What can we help you find?

Sign up for a monthly round-up of the latest Boardwalk discounts, special events, and insider news!