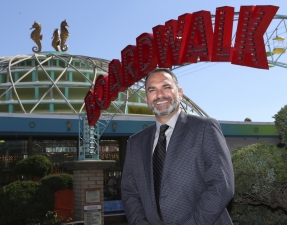 “Omid has been a valuable contributor during his time at the Boardwalk and has become a
respected leader in our Company and also within the amusement park industry,” said Santa Cruz
Seaside Company President Karl Rice. “With Omid’ s experience, insight, expertise, and
management abilities, the Boardwalk is well positioned for expanded success into the future.”

I enjoy the varied and unique challenges of an open-gate amusement park,” Aminifard said. “We
have developed an outstanding team of dedicated and caring professionals who understand the
importance of delivering world class guest and employee experience.”

Aminifard began his 36-year attractions career while a high school student as a park host at Sea
World in San Diego. His professional career began in Las Vegas as a member of the opening team
for three resorts, eventually becoming the director of-operations at the Stratosphere Hotel and Casino. Joining the Boardwalk as the director of Arcades and Attractions in 2000, he was promoted
six years later to director of Boardwalk Operations and was promoted to VP of Boardwalk
Operations in 2015. Under Aminifard’s direction, the park has grown to 39 rides, multiple
attractions, and family entertainment centers. Aminifard has also expanded the park operations to
year-round, and under his leadership the Boardwalk has achieved award-winning status.

Aminifard has been active within the Santa Cruz community and has served on professional boards
and organizations. Currently, he is chair of the Amusement Parks and Attractions Committee for the
IAAP A (International Association of Amusement Parks and Attractions) and member emeritus of
the Santa Cruz chapter of Big Brothers and Big Sisters. He has been a Big Brother, board member
of Big Brothers Big Sisters Santa Cruz, president of the Mar Vista Elementary Parents Club, and
coach for youth football.

What can we help you find?

Sign up for a monthly round-up of the latest Boardwalk discounts, special events, and insider news!